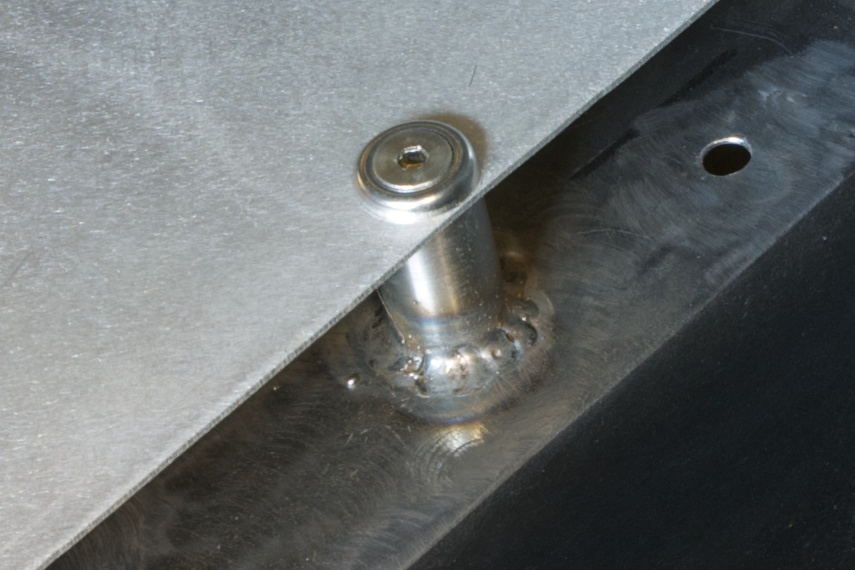 The device tray is fully mounted, taking 9 FabBosses — 2 on each side and one in the middle. Only the one in the middle took any real careful measuring — and that was because I couldn’t get my MIG gun all the way underneath the tray. All the other FabBosses were bolted to the tray, trimmed to fit, and tack-welded into place. END_OF_DOCUMENT_TOKEN_TO_BE_REPLACED 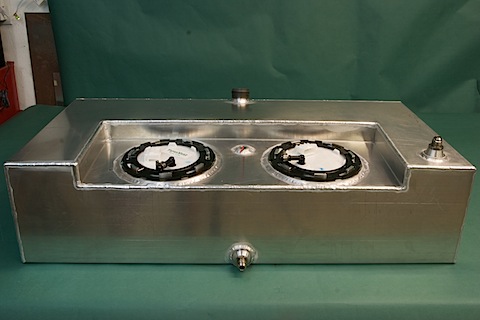 It’s been a while, but work on our Project Unfair is underway again. After my last project, I vowed not to ever use drag-racing parts for fuel delivery again. I was able to get that system to work most of the time, but eventually heat would cause cavitation, vapor-lock, and failure.

Instead, I worked with Carl Casanova at Vaporworx on our fuel tank. Unfair requires a wider range of fuel delivery than most cars since we’re expecting decent mileage while cruising, and 1200+ horsepower when running full-boogie for a quarter-mile pass or running the standing mile. As Carl calculated that means fuel needs range from 4 gallons per hour to 130 gallons per hour!

VaporWorx provides late-model GM fuel pump solutions to hot-rodders. These fuel modules, as GM refers to them, solve many problems. They are controllable by PWM (pulse-width modulation) and so can be slowed and sped up as the engine need changes. They also provide reservoirs to reduce cavitation, and can be hooked up to Walbro venturi pumps to literally be able to pump fuel to the last cupful in the tank.

Most of VaporWorx setups use a 5th gen Camaro pump, but that’s not quite up to the task, so we stepped up to a CTS-V pump. And that wasn’t enough, so we’re running two! VaporWorx has made some tweaks to their programming to support dual modules, along with setting a ramp-up method to support our crazy need to run 18 pounds of boost on race gas. Boost works against the fuel injectors: as the pressure increases, the injectors have to overcome it, so higher fuel rail pressure is needed. The VaporWorx controller takes all this into account. It’s an awesome solution to a difficult problem. 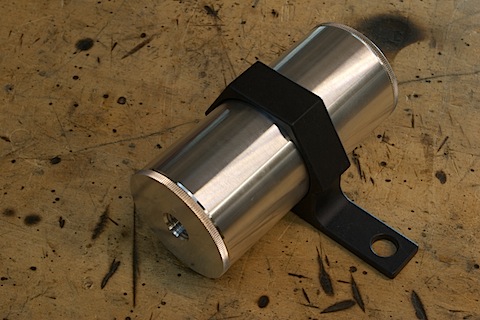 I’ve just finished up a major sub-system on our Project Unfair: our floating rear axle setup. It’s all about fixing the phenomenon of “knock back” , where the pedal goes to the floor after hard cornering due to rear axle deflection pushing the brake pads away from the rotor. Our Unfair solution is to use a circle-track full floating axle setup where the axle is de-coupled from the wheel hub and the rotor. Using some custom machined parts, I’ve hooked up Wilwood’s 14″ rear brake setup with a Moser GN floater. I still have some work for a parking brake, but this setup will completely prevent any knock back issues. 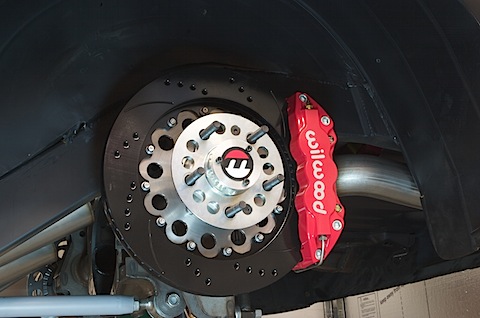 I’m working on getting the human interfaces fabricated on Project Unfair and I just finished mocking up the column connection to the steering servo. Wilwood pedals are coming next, or possibly mounting the seat. The neat thing about this steering shaft is that my original design used 4 U-joints with the steering shaft under the motor mount, but Tim Christ at Coast Chassis Design (the gods of 10.5 racing over in Daytona Beach) convinced me to look into rotating the rack so the servo pointed above the motor mount.

So I did, and here’s the result. A very clean 2 U-joint steering mechanism. Good stuff. This photo is of the mockup with steel U-joints… we have ultra-cool aluminum versions from Borgeson on the way. 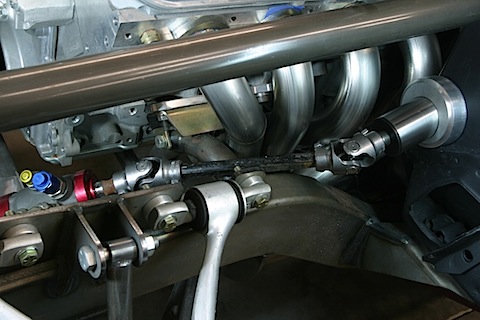 I’ve just finished a little project on Project Unfair that needed to be done to get to my next big project. In order to mount the seats, steering wheel, and Wilwood pedals, I had to move the sheet metal from behind the throttle pedal area away from the driver. Otherwise we’d be driving the car with our knees figuratively in our chests.

The driver’s side header needed some relief as well, so I extended a raised boss in the floor to the firewall, which gave the header plenty of room.

I cut out the offending sheetmetal in a single piece, using a combination of three tools. Two are my old standbys: pneumatic wheel cutter and a Bosch jigsaw, but the third tool is one of the coolest new tools in years, a cordless Ridgid Jobmax Multi-Tool. Using a Bosch bi-metal “blade” (the Ridgid can use a variety of other manufacturer’s accessories), I was able to cut straight and curved lines without the bother of air lines or power cords. The Ridgid uses the new-style Li-ion batteries, and they recharge in about 30 minutes.

I’ve also gotten a lot of use lately out of Bosch’s similar toolset. I use the little impact driver on everything. Lug nuts, suspension bolts, exhaust clamps. It can really speed up assembly and disassembly, which I do a lot when I’m figuring out fabrication sequences.

I’ve also gone from red to blue: I sold my Lincoln welders, and bought new Millers. I’ll write about them next. 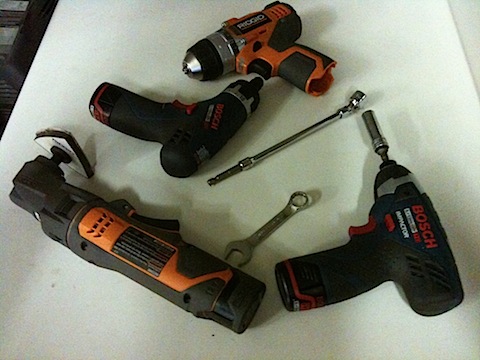 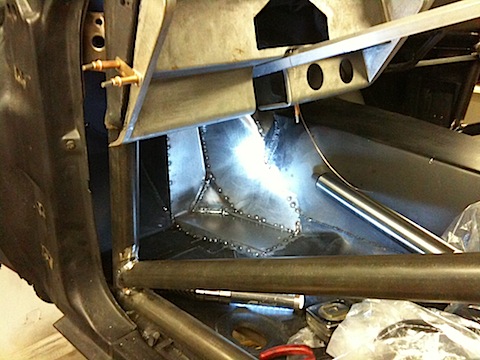 I’ve been hard at work for the past several weeks building headers and exhaust for our Unfair Camaro Project. I worked with Rich Craig over at Cone Engineering to get all the materials except for the oval stainless tube. The oval tube came from Burns Stainless. This is the fifth set of headers I’ve built from scratch, and I learn something new every time. These are my best effort yet. It is such a pleasure working with high quality materials. Anyway the header fabrication will be a full-fledged Super Chevy in the Project Unfair series. Look for it soon on a newsstand near you.

The oval tube is another matter.

Unfair is so low, that the only way to get enough exhaust for 800-1400 hp (depending on mode) under the car is to use oval tube. It’s high quality stuff, but there is a lot of stress in the material from all the machine work done on it. When you cut into the middle of a mandrel-bent oval tube, the tube tries to become round again. It takes a *lot* of work to get it ovalized again to weld it. The end result looks good, but the squeezing, clamping, and tack-welding to weld it to another oval tube is a lot more effort than ordinary round tube.

After this, I’ll be making custom mufflers using one of Cone’s kits. 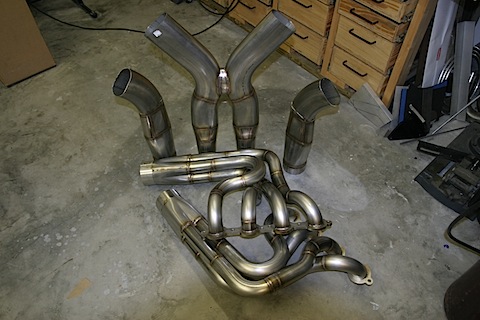 I spent most of a day this past weekend making a cool, nice-looking transmission crossmember for our Unfair Camaro project. Unfortunately, it sucked. To be more specific, it flexed downward 3/16″ when the weight of the transmission was placed on it. I made it out of high-grade 4130 rectangular tube, with proper welding and great fitment. It looks really good. But, as I said, it sucked.

I was lamenting this state of affairs to my friend John (a materials/mechanical engineer with a military firm) when he asked me why I was stuck on using an OEM based design with the insulating material (rubber or polyurethane) in the original place. Why not, he asked, move that material to the body side of the crossmember and get it away from the transmission itself? I thought about that for awhile and then John called back with a comment from another engineer friend of ours, Glenn, who said that the span of my original crossmember was a big problem too. I needed to make the crossmember shorter, which will minimize deflection a lot. Making the crossmember shorter meant I had to move the body interface from the subframe frame rail to the floor.

A bit of luck was with me: the location of the subframe reinforcement rib was welded to the floor at just the right location. I could weld tabs directly to the floor and they would be incorporated in the same structure used to bolt the subframe to the car. Perfect. So I made another crossmember, this time using a pair of poly rod ends (from AME) I had originally bought for II Much but hadn’t used. Putting the insulating material outboard of the transmission itself makes the whole setup more compact, with a big bonus of giving me more floor space for the humongous exhaust to come. 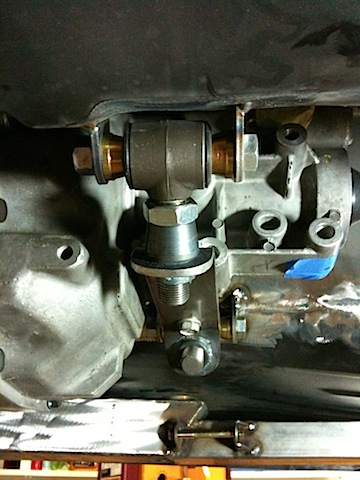 Here’s the new crossmember. It bolts directly to the transmission and save space and weight compared to the original design. I used spacers between the rod end and the body tabs to give us some fudge room when we put the real transmission in.

Project Unfair won’t be using standard gauges. Instead, we are going to use the integrated dash display from Stack Systems. The Stack display has several advantages over traditional gauges: 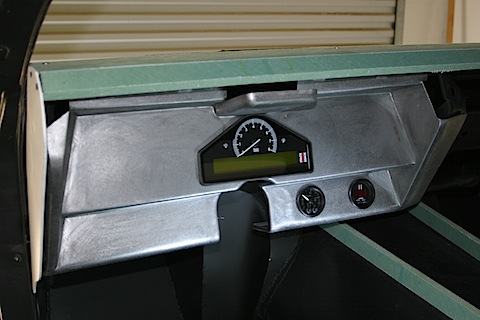 Check out all the available real estate on the dash when it’s all integrated into a single display. The gauges on the lower right are boost and lambda gauges. We’ll integrate their sensors into the data recorder as well, though the dash display doesn’t have direct support for them. We’ll put A/C vents in the space to the left and right of the display, and the traditional headlight and wiper switches on the lower left. 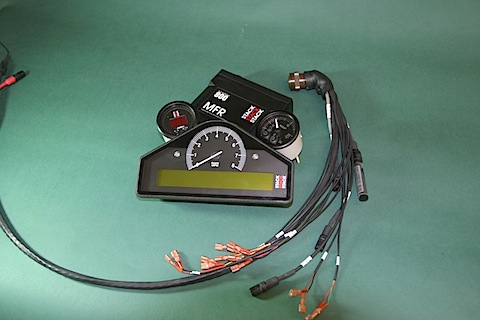 Here’s a closer look at the display, gauges, and recorder. The single harness is all that is needed for all the traditional dash gauges: oil pressure, water temp, tach, speedometer, odometer, fuel level, oil temp, fuel pressure, and voltage level. It also supports display of lap times (we will be installing a lap time sensor).