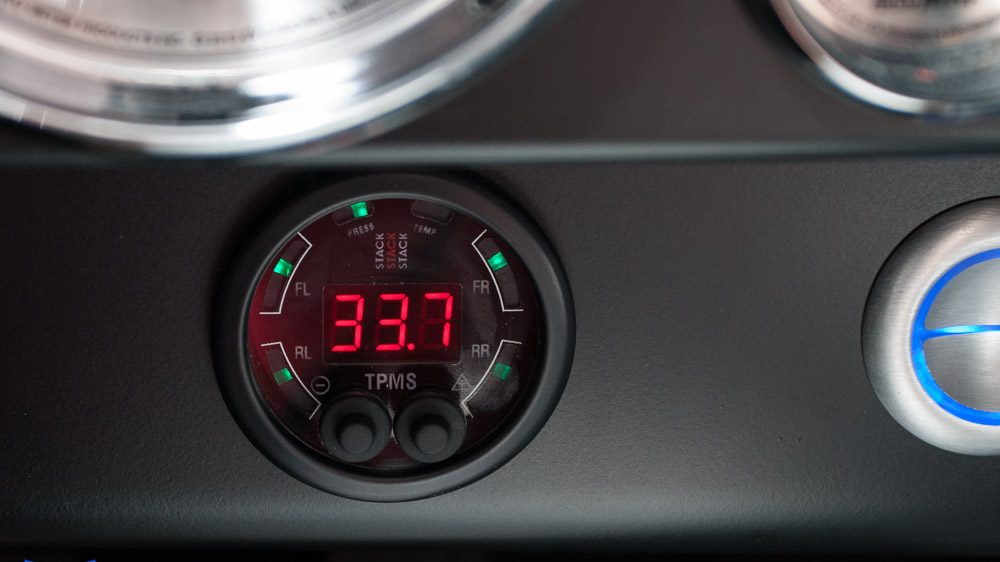 The Stack TPMS gauge shows tire pressures and temperatures at a glance.

More and more safety and convenience systems are making their way from late-model vehicles to our hot rods. Some high end builds are using anti-lock braking systems and traction control. Other examples are cruise control, three point seatbelts, thermostatically controlled environment controls, interior and exterior lighting, and navigation systems, to name a few.

The latest in this long list is TPMS: a tire pressure monitoring system. When we built the Tommy Camaro, the owner wanted to go without a spare, and use run-flat tires with a TPMS. After some research, and a walk-through at the PRI show, we found this amazing system from Stack. Stack specializes in data recording for race cars, and recently added a TPMS to their catalogue.

The gauge is designed to allow a driver to see tire pressures and temperatures at a glance, complete with high/low pressure and temperature alarms, along with data recording. Stack’s system monitors tire temperature to allow drivers on the track to know when their tires are hot enough to go 10/10ths.

But the most amazing thing about Stack’s TPMS is how light it is: the sensor weighs far less than an OEM sensor. The heaviest component in an ordinary sensor is the battery, and Stack’s system doesn’t have one. Instead, it powers the sensor with radio waves from a small antenna mounted near the tire. The RF protocol between the sensor and antenna updates at twice a second. 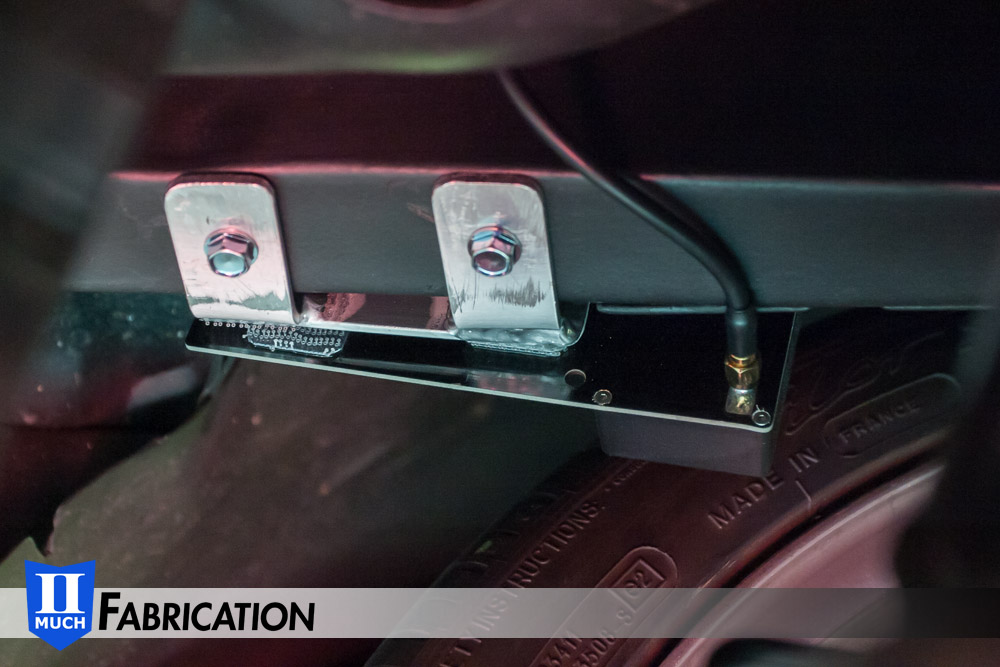 The rear antenna is relatively easy to mount. It just needs to be within 100mm of the side of the tire.

Installation of the system starts with mounting a sensor in each wheel using the valve stem as the anchor. From there, the 4 antennae (one per wheel) need to be mounted and tested for signal strength. The rear antenna mounts are just a simple frame rail modification, but the fronts proved stubborn because as the tire moved away from the sensor during turns, the signal strength between the sensor and antenna would fall too low. After much experimentation, we mounted the sensor to the spindle.

Another interesting thing about the Stack system is that the antennae can’t be bolted into place… the bolts act to suppress the radio signal. Stack recommends a 3M product called “Dual Lock” which is something like Velcro, only many times stronger. 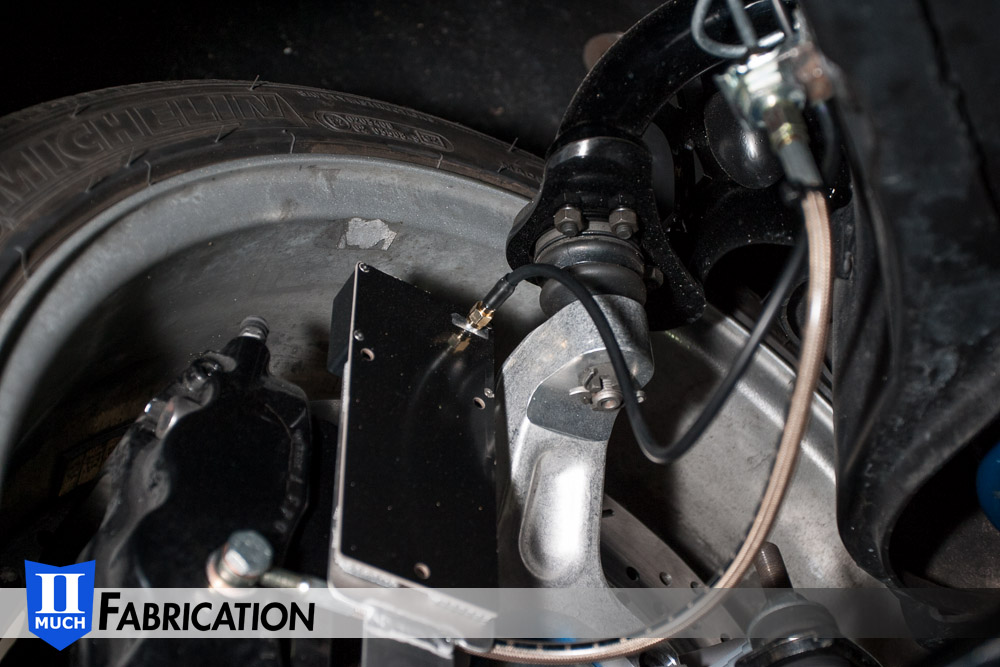 The front antenna is mounted to the upright so that it stays fixed relative to the tire. We used the caliper bolts to hold the mounting plate, and 3M Dual Lock is visible along the lower edge of the antenna.

Another consequence of the RF technology is that the connection from the four antennae to the main unit (called the “Interrogator” by Stack) has to be done by coax cable, rather than ordinary wire. Making those connections is a lot like making coax cables for your TV, and it requires a similar crimper. The interrogator also connects to the gauge, an optional data recorder, and a PC for programming to set up limits, unit display, change wheels and sensors, and the like.

The end result is a comprehensive tire safety system for street cars, plus all the data needed by enthusiasts and race teams to get the most out of their tires. 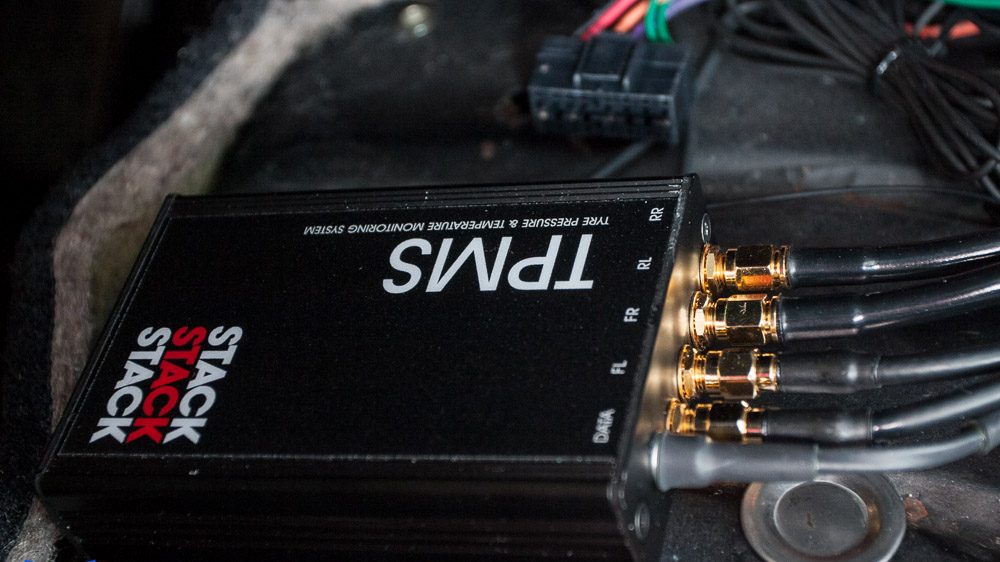 The Interrogator is the heart of the TPMS system. It powers all the other devices, receives data from the antennae, and communicates with a data recorder or PC via CAN-bus.